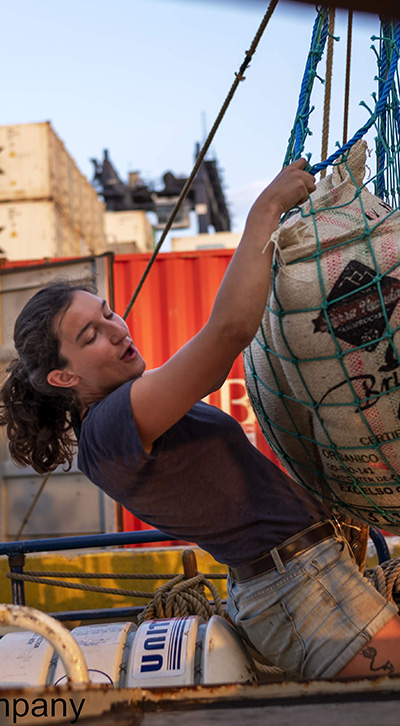 Send us an email at : info@blueschoonercompany.com

Please also read our terms and conditions. We also recommend that you take out travel insurance. For example, you can use Topsail Insurance, which specializes in sailing trips.

Co-founder of the Blue Schooner Company, Captain of the Merchant Marin

In order to combine his passion for sailing and the sea with his studies, he followed the course of long-distance captain and chief engineer of the merchant navy.
During his career he sailed on freighters, oil tankers, gas carriers, passenger ferries, liners and especially on the icebreaker L’Astrolabe in the Antarctic.
Deciding to become an actor in the fight against climate change and pollution, he finds a way to combine his experience and his passion by becoming the co-founder of the Blue Schooner Company, chartering a non-polluting vessel, able to carry goods and passengers. while being able to serve as a support for scientific missions.

Co-founder of the Blue Schooner Company, Captain of the Merchant Marine

Passionate about the sea and sailing, Jeff has been sailing since a young age. He naturally turned to a career as a merchant seaman, during which he embarked aboard a variety of vessels, from passenger ferries to icebreakers and oceanographic research vessels.
The desire to put his passion in line with his professional activities, the conviction of the need for a change in our lifestyle and consumption as well as the desire to share and offer his experience led in 2017 to the creation of the Blue Schooner Company.